The Historic Rock Cut Udayagiri and Khandagiri Caves in Odisha 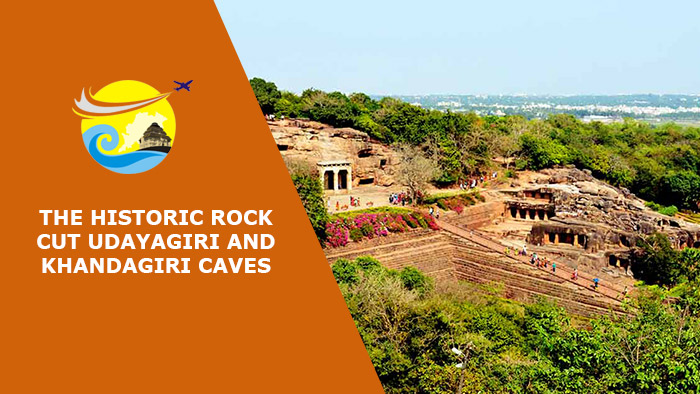 The Historic Rock Cut Udayagiri and Khandagiri Caves in Odisha

Are you planning to do visit the historic rock cut hills in Odisha, famously known as Udayagiri and Khandagiri caves? Basically, Khandagiri and Udayagiri are two hills located near Bhubaneswar city in Odisha and the caves got its name from these hills. Both of them are historic and antique recognized from the ancient Indian culture and are hardly 150 to 200 meters apart. Being a integral part of Jain rock-cut temples, these caves are carved by the famous Jain monks and it is presumed that these are not only evidence of history and architecture but also known to be spreading compassion, kindness, love, and above all religious tolerance worldwide. Certainly been counted among wonders of the country, both caves belong to 1st century. The Jain monks who created them strived under tough and critical conditions to built Udayagiri and Khandagiri caves, the striking and intricate sculptures representing religious symbols, life, royalty, courts and processes of society. The sandstone caves are carved in a way depicting country’s well known past. They were built at the time of King Kharavela ruling and he was known to be one of the best kind rulers of the time. The historian famously named as Stirling, brought the attention of public and tourists towards these caves and it is among one of the widely visited places in Bhubaneswar, Odisha.

The term ‘Udayagiri’ depicts for sunrise hill. In total, there are 18 caves present here. To know about each one of them, simply read on the following.

• Cave 1 – Well known as ‘The Rani Gumpha’ or ‘The Queens’ cave, it is the largest majestic cave, which is a two storied monastery supported by the several columns and terraces. On the lower floor, there are 7 doors whereas on the upper floor, there are 9 doors for the entrance. The different sculptures of royal entourage, musical instruments and dancing women could be seen here. The cave is majorly used for all chant performance, theatre performance and so related to Samaja celebration. Even, a beautiful image of Surya chariot ride is also drawn here.

• Cave 2 – Famously known as ‘Bajaghara Gumpha’, it has been backed with two large sized inner columns and front columns.

• Cave 3 – Known as ‘Chota Hathi Gumpha’, it has elephants next to front door and is known to render comfort and peace to all.

• Cave 4 – Known as ‘Alkapuri Gumpha’, it is double storied and is carved with elephant sculptures and other beautiful magical creatures, along with ornaments and treasures.

• Cave 5 – Well acknowledged as ‘Jaya Vijaya Gumpha’, it is double storied and some columns in the cave are constructed and few of them are rock-cut.

• Cave 6 – Well-known as ‘Panasa Gumpha’, it has two columns built and there is a sanctum carved with ochre art nearby the cave.

• Cave 7 – Famous as ‘Thakurani Gumpha’, it is double storied, contained with carvings related to flying animals.

• Cave 8 – Known as ‘Patalapuri Gumpha’, it is roughly cut. There are two columns available at the verandah of the cave and flying beings are carved into them.

• Cave 9 – Well known as ‘Mancapuri Gumpha’, it is double storied with 4 columns in the lower floor. The cave is carved with many different kinds of comforting and peaceful inscriptions as well as sculptures.

• Cave 11 – Popular as ‘Jambesvara Gumpha’, it has two door openings backed with one column, two pilasters and low ceiling. It is assumed that the cave belongs to the wife of Mahamade, named as Nakyia.

• Cave 12 – Known as ‘Vyaghra Gumpha’, it is relatively a small unusual temple cave. It is supposed to be the cave of the town judge, Sabhuti. The entrance is shaped like the head of an animal.

• Cave 15 – Known as ‘Dhanagraha Gumpha’, it is carved with the sculpture of gate keeper.

• Cave 16 – It is well acknowledged as ‘Haridasa Gumpha’.

At Khandagiri hill, there are about 14 caves available in total. These caves are supposed to be infringed by the local Brahmins turning them into Hindu shrines.

• Cave 1 – Known as ‘Tatowa Gumpha’, the entrance is intricately carved with the parrots and looks splendidly beautiful, guarded with 2 bulls and 2 lions.

• Cave 3 – Known as ‘Ananta Gumpha’, it comprises sculptures of women, elephants and athletes.

• Cave 4 – Known as ‘Tentuli Gumpha’, the entrance of the cave is carved with portals.

• Cave 5 – Famous as ‘Khandagiri Gumpha’, it is a double storied roughly cut cave.

• Cave 7 – Known as ‘Navamuni Gumpha’, the walls of the cave is carved with sculptures of Sasana Devis, Ganesha and Jain Thirthankar.

• Cave 11 – Well acknowledged as ‘Lalatendukesari Gumpha’, the rear wall of the cave is carved with comforting Mahavira, Jain Thirthankar and Parsvanatha.

• Cave 14 – Known as ‘Ekadasi Gumpha’, it is like a cell. All caves represent Digambara Jain postures, principles and their praying postures.

• By Air – The closest airport to Udayagiri and Khandagiri caves is Bhubaneswar airport, at an about 8 km distance away.

• By Road – Once you are in Bhubaneswar, tourists can opt for any means like private taxis or bus service to reach there.

• By Rail – Bhubaneswar railway station is at an about 10 km distance from the place, and from there, private cab or taxi services are available and could be opted.

In a shell, both Udayagiri and Khandagiri caves are open all round the year, right from sunrise to sunset. The best time to visit the caves is in between October to March months. Though, tourists can visit anytime throughout the year. To enjoy the scenic beauty and charm of the place, there is an entrance fees that will be charged from tourists. For children below 15 years of age, no amount will be charged from them. For Indians, the entrance fee is Rs. 5 per person. Tourists from Pakistan, Sri Lanka, Nepal, Bangladesh, Maldives, Afghanistan or Bhutan, an entrance fee of Rs. 5 per person will be charged. For other countries, an entrance fee of Rs. 100 per person will be charged. Want to go for the historical and archaeological tour to Udayagiri and Khandagiri caves in Bhubaneswar, Odisha? Undoubtedly, these two hills are among the highly visited tourist spot in Eastern India. If you want to visit there, contact with Best Choice Holiday travel agent for all information. Gear up for an adventurous tour to Udayagiri and Khandagiri!