Snana Purnima: When Lord Jagannath & His Sibling Deities Bath in Aromatic Water Ahead of Rath Yatra 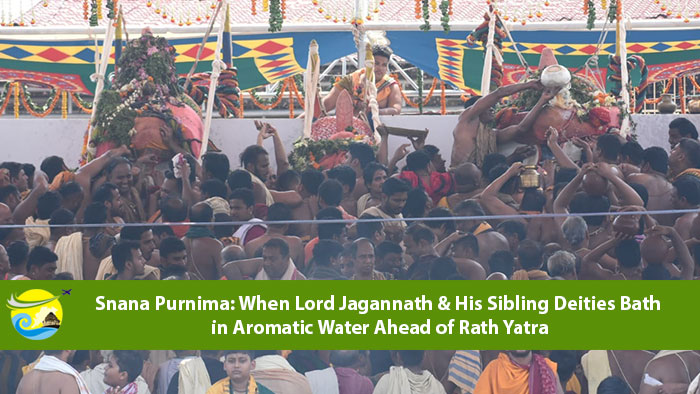 Snana Purnima: When Lord Jagannath & His Sibling Deities Bath in Aromatic Water Ahead of Rath Yatra

Ahead of the auspicious festival of Rath Yatra, Lord Jagannath, his siblings- Lord Balabhadra, Devi Subhadra- and Sri Sudarshan takes divine bath of on the Snana Mandap, which was concluded yesterday (June 17, 2019). After that bath, devotees have the darshan of the deities in Gajanana Besha. Later, the deities are taken inside the Puri Srimandir.

Early in the morning on Snana Purnima, the temple servitors escort the deities in ‘Dhadi Pahandi’ to the Snana Bedi, or the bathing altar inside the premises of Puri Temple, facing the Badadanda or the Grand Road.

All About the Importance of Snana Purnima Ritual:

The occasion marks a prelude to the annual Rath Yatra celebrations which usually falls in the month of July.

As per the ritual, Sri Sudarsan is escorted first to the Snana Bedi while Lord Balabhadra, Lord Jagannath and Goddess Subhadra follow. The deities are accorded a bath in 108 pitchers of aromatic water by Pujapanda servitors. The water for the Holy Trinities’ bath is drawn by Garabadu servitors from a well called ‘Sunakua’ which is located inside the Puri temple premises.

After completion of the bathing rituals ( the rituals are also called ‘nitis’), the sibling deities are dressed up in ‘Hati Besha’ or the elephant attire and then in the evening devotees are allowed to go to the bathing altar to offer prayers during Sahan Mella.

This year the annual Rath Yatra is on July 4. The chariot journeys or the Rath Yatra of the Holy Trinity have elaborate celebrations where the deities come out of Puri temple and devotees accompanied the journeying of the Lords through the ‘Sri Kshetra’ to the Mausi Maa temple or the Gundicha temple. Before the chariots roll, the Gajapati King (Puri King) wears the traditional outfit and sweeps all around the deities and chariots with a gold-handled broom and sprinkles sandalwood water and powder; it is called as the ‘Chera Pahara’ ritual.

Every year, proper security arrangements are made for the festival as it witnesses a footfall of lakh of devotees across the globe. Besides, special trains also run during the festival. Traffic movement is also streamlined in the holy city to ensure the safety of the commuters. You can book Rath Yatra Package through Best Choice Holiday.

It is believed that only those can visit Puri in Odisha have the darshan of the deities whom the Holy Trinity wants to be. Let’s see if you are the blessed one. Jai Jagannath!!