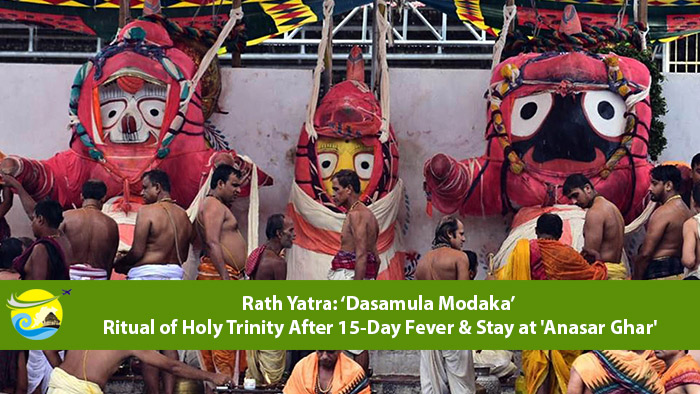 After the Sahana Mella, when Lord Balabhadra, Lord Jagannath, Devi Subhadra- and Sri Sudarshan take divine bath of on the Snana Mandap (the ritual was conducted on June 17, 2019), Lord Jagannath and his siblings are taken in a ritualistic procession to the ‘Anasar Ghar’ as it is believed that the deities get fever after the ceremonial bath where they are kept in privacy under the care of the Raj Vaidya for a period of 15 days. During these 15 days which is called as Anasara period, the Vaidya treat the deities with herbal medicine.

As per believe, the Vaidyas offer a special herbal medicine known as ‘Dasamula Modaka’ to the deities on the 14th day or today (June 29, 2019) following instructions from Puri Gajapati Maharaj. Following the ‘Dasamula Modaka’ ritual, the Holy Trinity is believed to be recovered from illness.

Besides, on the fifth day of their Anasara period (Anasara Panchami), ‘Phuluri’ or scented medicinal oil is applied to the Trinities following which ritualistic ‘Osua Lagi’ is performed from the day of Sasthi and continue till Navami. The Chaka Bije Niti of the Holy Trinity is performed On Dashmi. Moreover, a paste of sandalwood, saffron and camphor is applied to the deities as part of ‘Anasara Ekadasi’ rituals (which is today June 29,2019).

Lord Jagannath and his siblings then come out of the Anasar Ghar for Nabajouban Darshan, only a day before Rath Yatra (which is on July 4, 2019). During the stay of deities inside the Anasar Ghar, devotees are not allowed to have darshan of the Holy Trinity.

The Odisha government has also come up with measures for the convenience of visitors apart from elaborate security arrangements as toll taxes will not be collected at Pipili Toll Gate during Gundicha Yatra (July 4), Bahuda Yatra (July 12) and Suna Besha (July 13).