8 Interesting Facts About Jagannath Temple, Puri Which You Might Not Know

Home - Odisha - 8 Interesting Facts About Jagannath Temple, Puri Which You Might Not Know 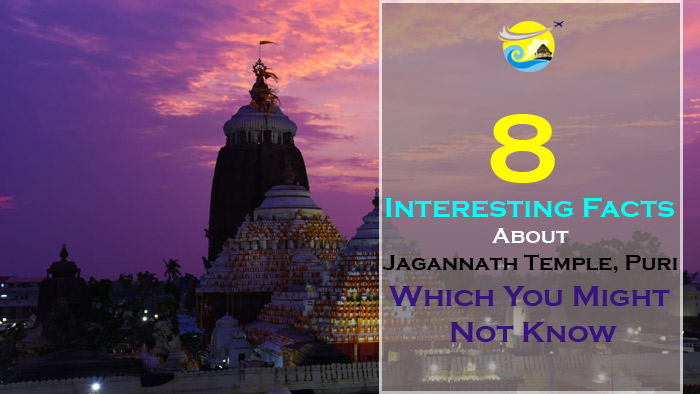 8 Interesting Facts About Jagannath Temple, Puri Which You Might Not Know

The Jagannath Temple in Puri is revered all across the globe for the spiritual essence it reflects. Every year hundreds and thousands of devotees visit this temple to attain the religious peace and serenity they’re looking for. Not just that, the Jagannath Temple is also of the places where the “Chaar Dhaam Yatra” is accomplished. This is also of the reasons which enhances the significance of the temple, thereby attracting more and more tourists every year.

Also, during the annual Rath Yatra festival (also known as Chariot Festival or Car Festival) in Puri, the Lord comes out of his holy abode to bless the devotees, and is celebrated with great delight. During this festival, the giant idols of Lord Jagannath, accompanied by his siblings – brother Balarama and sister Subhadra – come out of the temple in decked up chariots (Rathas) to meet their devotees.

As the legend goes, the Lord Jagannath Temple was originally built by King Indradyumna after Lord Vishnu blessed him in his dreams and guided him to find Nila Madhava. Historically speaking, the antiquity of Jagannatha can be taken to the second century B.C. when Kharavela was the emperor of Kalinga (Odisha’s ancient name).

Besides, there are some strange and unique facts about this temple which we have tried to highlight in our piece. Check them out below and be surprised for yourself.

1- Astonishingly, The Flag at The Top of The Jagannath Temple Always Waves in the Opposite Direction in Which The Wind is Blowing: Defying the natural scene, wherein any piece of cloth waves as per the course of the wind, the flag mounted at the top of Jagannath Temple, Puri makes a unique exception of waving in the opposite direction. There hasn’t been any scientific theory until now to back up this process.

2- The Sudarshan Chakra Riddle will Perhaps Always Remain A Mystery:
If you must have ever been to the Jagannath Temple, you must have surely noticed the Sudarshan Chakra. Well, it is believed that the Chakra was brought and installed in this temple around 2000 years back. It is 20 feet in height and weighs about a tonne. One of the mysteries surrounding this Chakra is which technique was used back then to install this Chakra. Was there any machinery used, was it put up there by some human force? Nobody knows! Another interesting fact of this Chakra is that it looks exactly the same from every direction. Now, how can that be possible? Well, we still have no answers to it.

3- You’ll Never Find Anything Flying Above The Temple:
Is it not strange when you find the sky absolutely clear, devoid of any birds, airplane or anything that can fly? That’s exactly the scene above the temple; literally nothing can be observed flying above the temple, not even a single bird. There has been no scientific explanation for it yet, but we would really like to know, and we’re sure you must be curious too.

4- The Climb to Change The Flag:
Every single day, without any fail, a priest of the temple has to climb the temple’s dome which has a height equivalent to that of a 45 storey building, in order to change the flag. No protective gears are used by the priest while climb, and it’s all done using bare hands. In fact, this particular ritual is older than many civilizations, and it’s almost been 1800 years. It’s also said that if the ritual is skipped even for a day, the temple will have to be shut down for a long period of 18 years. What a sight to behold!

5- No Shadow of The Temple:
Have you come across any living being or object that is not supported by their own shadow? Literally, never! But in the case of Jagannath Temple, Puri, it has been reported that the temple reflects no shadow, at any time of the day from any direction. What do you have to say about that? Truly, an architectural marvel and a surprising fact

6- The Temple’s Prasad Never Gets Wasted:
Having visited Jagannath Temple, you can never truly miss out on savoring its prasad, which is cooked in earthen pots using firewood and tastes extremely delicious. One theory of this prasad is that exactly 7 pots are put on top of one another and surprisingly, the top most pot is cooked first followed by the bottom pots in order. Other than that, the food never gets wasted here. The number of devotees visiting on any day in the temple ranges between 2000 to 20,00,000, but the quantity of the Prasad cooked here remains exactly the same throughout the year. Yet none of it goes insufficient or wasted. That’s a strange phenomenon and we’re really inquisitive to know how that happens

7- No Sound of The Ocean Inside The Temple:
You must have missed this out, but do take a note that while stepping into the Simhadwaram (the main door of the temple), you’ll not hear any sound of the ocean waves. And once you leave the temple, you can hear the same. While there’s no scientific explanation for this, it is believed that the phenomenon of sound of ocean waves inside the temple was actually the will of Subhadra, the sister of the two lords who wished for serenity within the temple gates. That’s an interesting will to ask for!

Apart from all these interesting facts, it’s also believed that the idols of the Lords are buried from every 14 to 18 years, one above another, and are replaced by new ones. Interestingly, these deities are said to be disintegrated on their own. These and many other unique facts revolve around the temple of Lord Jagannath, Puri. So, the next time when plan your Puri tour and visit here, you know exactly what all to observe.

To book any Odisha tour or outstation tour email us at book@bestchoiceholiday.com or Call/WhatsApp on +91 8114378182!

Follow Us
Trips & Love
You will find us seeking new places, road tripping to discover new destinations, soaking up the culture, hiking the hills, sampling the local cuisine, and chasing new music with a beer in one hand and a camera in the other. Cheers to more adventures, moments & memories!