Odisha Tourism: Heritage Attractions That Elevate The Beauty Of Odisha 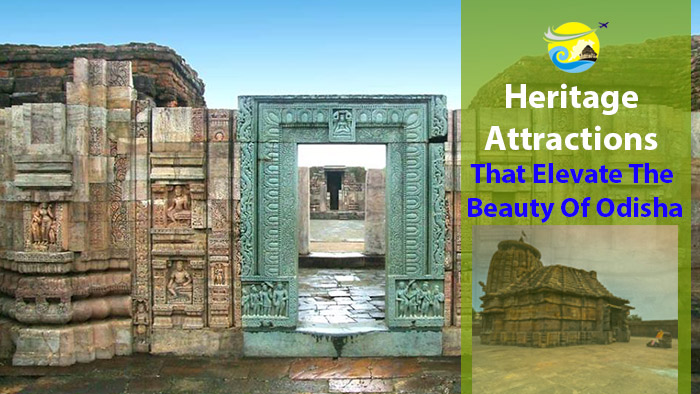 Odisha Tourism: Heritage Attractions That Elevate The Beauty Of Odisha

It is rightly said that if you want to know about a city, it’s culture and history, visit its heritage structures. Not only will these sites speak a lot about the place, but will also surprise you with its unique style of architecture and the richness it carries. Talking about the heritage tour in Odisha, the state has got a glorious one, which dates back to almost two thousand years. Also, there are various historical places out here which till stand high to remind the generations about the interesting tales it surrounds.

In fact, the state has been a home to Hindus, Jains and Buddhists as well, and houses such brilliant tourist attractions that it will leave you spellbound. A lot of historical sites are scattered all over the state. In case you happen to be in Bhubaneswar, the capital city of Odisha, you can visit the Chausathi Yogini Temple, which is a 10th century old temple, and was constructed during the Kalachuri kingdom. The structure resembles that of the temple in Khajuraho, and it follows the Yogini culture, where about 70 Yoginis reside in it. The temple in itself looks remarkable and will give you a memorable time.

Not just this temple, Bhubaneswar is filled with amazing heritage strictures, some which carries the echoes of ancient tales, and others being of religious significance. If you’re more inclined towards spirituality and heritage at the same time, then do visit the Lingaraja Temple, Rajarani Temple, Mukteswar Temple and others located in the city.

Of if you feel like sighting some unique heritage structure, then do visit the Khandagiri – Udayagiri caves, go for a guided tour here, and learn about the history of these caves as well as of Odisha, like never before. The caves look splendid, and are replete with beautifully carved inspirations as well as figurines. You can also be at Ratnagiri and Lalitgiri for some more brilliant views and tales of the past.

Situated not far from Bhubaneswar, in the pristine Dhauli Hills, is situated the Dhauligiri, which makes up for a great attraction, and is the heritage site which witnessed the transformation of King Ashoka’s character. In fact, it is a great place for people following Buddhism, and the site houses a beautiful Peace Pagoda, besides having rock cut caves as well as a Sadharmavihar monastery nearby.

For a more scenic and enhanced knowledge of Odisha’s Buddhism culture, you have to visit the Padmasambhava MahaVihara Monastery, located in Jirang, which is a serene sight to visit, and to take back some peaceful moments.

While at Cuttack, you can catch the views of the historic Barabati Fort, which is a 14th-century fort, built during the Ganga dynasty, bringing charm and glory to the Millennium City.

If you’re in Konark, then do not forget to visit the Konark Sun Temple, which is one of the best and most significant heritage sites situated in Odisha. As the name suggests, the temple has three deities dedicated to the Sun God on three different sides, which catch the direct rays of sun in the morning, afternoon and evening. In fact, this temple is considered to be one of the last standing structures before the fifteenth century in the country.

That apart, the sight and beauty which the Jagannath Temple, Puri offers is beyond comparison. The kind of architecture which the temple adorns amamzes both the first-time as well as frequent visitors. Your stay in Odisha will be considered incomplete without visiting this heritage temple, which is revered by one and all.

That apart, there are a lot many heritage sites in the state, which carries an old-world charm, and also depict the rich heritage culture of Odisha.

Follow Us
Trips & Love
You will find us seeking new places, road tripping to discover new destinations, soaking up the culture, hiking the hills, sampling the local cuisine, and chasing new music with a beer in one hand and a camera in the other. Cheers to more adventures, moments & memories!